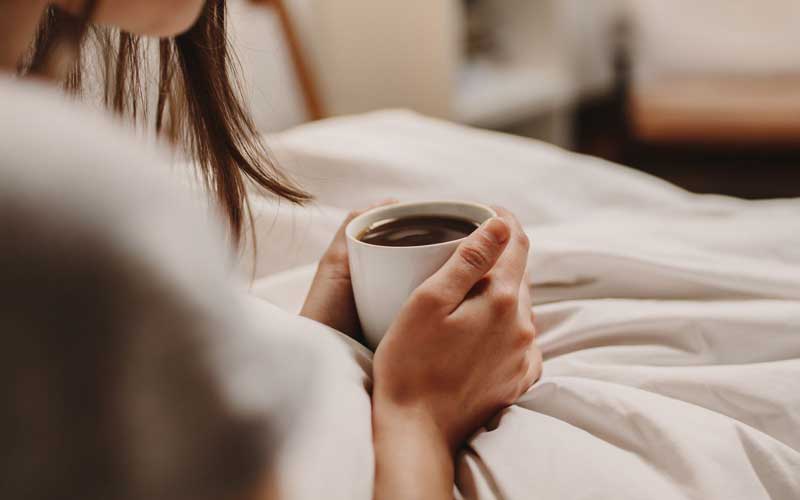 How does caffeine affect sleep?

Caffeine is the world’s most popular psychoactive substance, which is widely used in foods and drinks around the globe. Coffee beans, tea leaves, cacao pods, and kola nuts are some of the plants with higher levels of caffeine. It is also synthetically produced and often used in energy drinks and medications due to its energizing and alertness-promoting effects.

Most of the time, it is consumed in beverages. Since there are so many different types of coffee and tea, it can be hard to know how much caffeine is in a cup that has no label. Overall, coffee is the most popular and potent drink worldwide.

That’s why in today’s article, we’ll discuss everything caffeine and sleep-related. By the end of this guide, you would have learned:

How does caffeine affect sleep?

The effects of caffeine can adversely impact sleep time, efficiency, and satisfaction. Generally speaking, older adults who regularly drink this beverage are more susceptible to sleep problems. That’s because it notably reduces the time of slow-wave sleep. This is the stage of deep sleep, which helps you feel well-rested and refreshed in the morning.

A study found that even a small amount of caffeine before bed can reduce sleep time by an hour. The study participants didn’t realize their sleep was disrupted, not only shortened when they consumed caffeine even six hours before bed. If you have trouble sleeping, consider limiting your intake of caffeinated drinks, since they are considered a stimulant and not a beverage that will relax you and calm you down.

How can you tell if caffeine is affecting your sleep?

Do you struggle with insomnia, headaches, or anxiety during the day? This could be a sign of dependence or excessive use of caffeinated beverages. Frequent waking’s, inability to fall asleep and nighttime anxiety are all signs that caffeine is interfering with your sleep.

If you find yourself sleepy during the day and don’t get enough sleep during the night, your body could be giving you a sign that you are consuming too much coffee. In that case, you should consider putting down the mug and catching up on some much-needed rest. If you don’t know where to start, you can take a look at our guide on ‘Tips & Advice on How to Sleep Better.’

How much caffeine is safe to drink?

It is essential to find a level of consumption that is healthy for you since caffeine can be beneficial and harmful at different levels. The FDA (Food and Drug Administration) recommends that you don’t drink more than 400mg of caffeine per day or about 4-5 cups of coffee. However, a large cup of coffee can sometimes have up to 500 mg of caffeine content which is way more than the daily recommended intake.

That’s why you should always read the fine print about what you’re drinking since some beverages might have a large amount of caffeine which your body might not be able to process it adequately. If you don’t know if your caffeine intake is right for you, consulting with a doctor is always an excellent idea.

How many hours before bed should you drink caffeine?

A minimum of six hours before bedtime is the recommended cut-off for caffeine use. If you usually go to bed at 10 pm, avoiding caffeine after 4 pm can help minimize sleep problems. If you find that the six-hour recommendation isn’t enough, make a note of when you consume caffeine and how you sleep after.

It is possible to get a better night’s sleep with a longer period of abstaining from coffee and tea. However, when we talk about tea, we mean options like black and green tea since they have high caffeine dosage, but there are other teas that promote relaxation and sleepiness. You can check them out in our guide on ‘The best teas before bed.’

Can caffeine keep you awake?

In general, caffeine can cause a burst of energy in your body, stimulating your central nervous system. Coffee can help people wake up in the morning, but it can cause harm like sleep deprivation at night. The issue is that it can boost cognitive function in the severely fatigued, but it can’t permanently ward off sleep or fix the effects of long-term sleep loss.

We want to highlight the fact that this beverage can marginally boost your performance, but it won’t work as a substitute for sleep.

Depending on the dose and state of the individual, the effectiveness of caffeine varies. Typically people who feel foggy and tired may benefit from the arousing effects of coffee. However, for someone who is alert and aroused, it may cause an over-arousal that can lead to dependency.

Can caffeine cause insomnia?

There are short-term benefits to coffee consumption, but it can lead to insomnia and other sleep disorders. Consuming it to stay awake at night may lead to a variety of health problems, which is something we should all try to avoid.

For example, the increased severity of sleep-disordered breathing, which is the primary characteristic of Obstructive Sleep Apnea (OSA), has been linked to increased levels of caffeine in sodas. With that said, it’s unclear why this association was only found with caffeinated sodas but not with coffee or tea.

Those who suffer from sleep-disordered breathing, for example, may not know about their sleep disruption and find themselves attributing excessive daytime sleepiness to other causes. So if you find it hard to fall asleep during the day, it might be a good idea to cut back on your coffee and soda consumption.

What are the positive effects of caffeine?

Caffeine is considered to be a moderately effective alerting agent. Generally speaking, it can have a positive effect on your reaction times, mood and mental performance.

A normal dose of caffeine is considered to be around 50 mg to 200 mg per day. It works best when you take it on an intermittent, off-and-on basis. Higher doses can have more powerful effects, but they can also be harmful to your sleep. Think about the consequences. Is it worth it to drink multiple cups for just a few energizing minutes?

The effects of a low dose of amphetamine can be similar to the effects of 500 or 600mg of caffeine, which says a lot on its own. However, it’s not as effective when you consume it daily. This is because your body gets used to it and builds up a tolerance.

What are the negative effects of caffeine?

Overall, caffeinated drinks can have a disruptive effect on your sleep and its quality. A study found that the timing of your body clock can be delayed by coffee. As a result, the effects of caffeinated beverages can often reduce your total sleep time. It can also reduce the amount of deep sleep (REM stage) that all of us need in order to wake up energized and ready to take on the day ahead of us.

The effects of caffeine can be harmful even when you consume it earlier in the afternoon. As we’ve already mentioned, a study found that consuming caffeine 6 hours before bed reduced sleep time by 1 hour. We need sleep to function properly and for our bodies to be healthy.

If you’re an adult, your body might need a longer time to process caffeine, and high doses of it can even cause complications during pregnancy. Too much caffeine can come with common side effects like diarrhoea, nausea, increased heart and breathing rate and sweating. In addition, it’s possible to have withdrawal symptoms when you stop taking coffee. These symptoms might include headaches, sleepiness (low energy levels in general) and mood swings.

To conclude our guide on ‘How does caffeine affect sleep,’ we would like to say that it has both positive and negative attributes. It is an effective way to improve concentration, alertness and energy. But if you consume high amounts of caffeine on a daily basis, the effects can be short. There is a negative effect on sleep that can be caused by it. The quantity and quality of your sleep can be reduced, which can lead to sleep disorders.