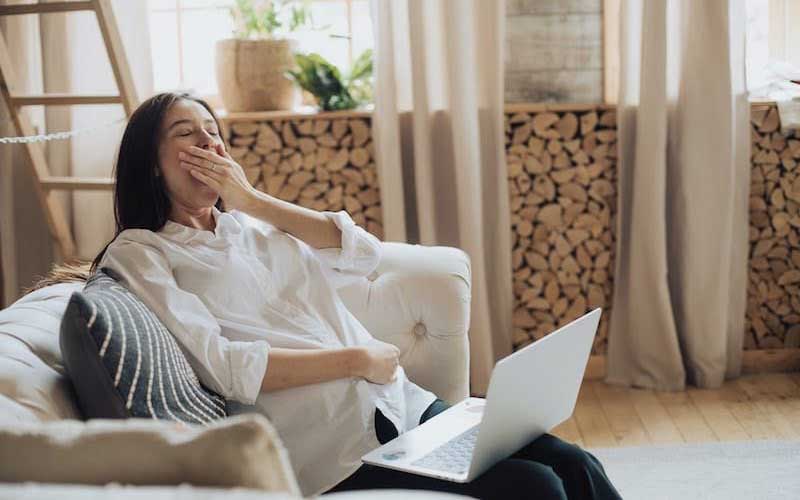 Though not a disorder in itself, excessive sleepiness is something we should all take seriously. Your body might be trying to tell you that you aren’t getting enough sleep, or it might be raising red flags about a sleep disorder. Excessive daytime sleepiness can be recognized by a few signs, which will talk about today so you can identify and remedy the cause.

Most people will probably overlook feeling sleepy, but they shouldn’t since it can be your body signalling there is an issue. That’s why by the end of this article, we’ll try to explain:

What is excessive daytime sleepiness?

The definition of excessive daytime sleepiness is difficulty staying awake or alert, or an increased desire to sleep during the day. It is possible that the feelings of sleepiness may be stronger when you are sitting or driving. When this occurs almost every day for at least three months, it is considered to be excessive and somewhat unhealthy.

It’s easy to confuse sleepiness with fatigue because a lack of energy and sleep characterizes both conditions. Also, they might arise under similar circumstances, like being awake for a long period. The main difference is that people with fatigue are often unable to fall asleep, despite feeling tired. Understand that it is possible to experience both conditions simultaneously.

Any condition that prevents you from getting a good quantity and quality sleep at night can cause excessive sleepiness throughout the day. While daytime sleepiness is the only symptom you know, other signs, such as snoring or kicking, maybe occurring while you are sleeping.

Many people with sleep disorders have bed partners who inform them about other factors during the night. However, regardless of the cause, if daytime sleepiness is keeping you from being productive, it is essential to have your sleep condition evaluated. Here are some of the more common causes of excessive sleepiness:

Sleep deprivation can happen when a person doesn’t get enough sleep. According to the American Academy of Sleep Medicine, adults need between 7 and 8 hours of sleep each night to be alert and well-rested the following day. However, according to the study, about 20% of adults fail to get the rest they need.

A person who doesn’t get enough sleep during the night is more likely to feel sleepy throughout the day. Conversely, people who don’t get enough rest feel constantly tired. Sleep deprivation causes can include an underlying medical condition, excessive or inconsistent work hours, and personal obligations.

Generally speaking, in most other cases, even simple lifestyle changes can improve the duration and quality of a person’s rest, but in some situations, they might require their own specific treatments due to underlining medical causes

Insomnia is a sleep condition that causes difficulties sleeping. Often, individuals who have the condition tend to feel excessively sleepy but are still unable to fall or stay asleep. There are different ways people experience insomnia. Some of the most common symptoms include continually waking throughout the night and being unable to fall back asleep, waking up in the early hours of the morning or not being able to fall asleep at all.

Insomnia is a sleep disorder that can be difficult to diagnose. According to the CDC (Centers for Disease Control and Prevention), doctors only diagnose insomnia by ruling out other sleep disorders.

Sleep apnea is a potentially serious condition in which you stop and start breathing at night. However, it can also leave you sleepy during the day. Several other symptoms are associated with this condition: loud snoring and gasping for air while sleeping, sore throat and a headache upon waking up, and problems with attention and irritability.

Sleep apnea can also contribute to high blood pressure, type 2 diabetes and obesity. There are two different types of sleep apnea. Both prevent you from getting enough deep sleep during the night. These types are the following:

The urge to move your legs is caused by a syndrome called restless legs syndrome (RLS). When you feel a throbbing or itching sensation in your legs when lying down, it’s time to get up and walk to make it better. RLS makes it difficult to fall asleep, which results in excessive sleepiness the next day.

Up to 10% of the world population could be affected by RLS, though it is unclear what causes it. Some research suggests low iron may be to blame, while others say there is a genetic component. However, many scientists think that the root of RLS is related to problems with the brain’s central nervous system.

Narcolepsy is a sleep problem that’s often misconstrued. Like RLS, it is a neurological condition. The brain does not correctly regulate the sleep-wake cycle if you have narcolepsy. A person with narcolepsy will awaken multiple times during the night, and during the day, they will have episodes of excessive daytime sleepiness. People with this disease can fall asleep in the middle of a conversation.

Narcolepsy is a fairly uncommon disorder compared to RLS. However, it is often misdiagnosed as a mental health disorder. Anyone can have it, but it usually develops in individuals between the age of 7 and 25.

One of the more common signs of depression is a change in your sleep schedule. When you develop this mental condition, you might sleep much more or much less than you need to. If you don’t sleep well at night, you are more likely to get sleepy throughout the day. Frequently sleep changes are an early sign of depression.

For some individuals, changes in their sleeping habits occur after other signs have appeared. Unusual levels of brain chemicals, issues with the regions of the brain that manage mood, and traumatic events are some of the possible causes of depression.

Some medications can cause drowsiness as a side effect, meaning you’ll be feeling sleepy during the day. Some of the most common ones that come with this side effect include antidepressants, medications that treat high blood pressure, antihistamines, antiemetics, antipsychotics and drugs that treat anxiety. If you notice that your prescription medication is making you sleepy, make sure you talk to a professional.

Generally speaking, older people spend more time in bed than younger adults. Sleep quality begins to decline in middle-aged adults. We experience less deep sleep as we age and wake up more frequently in the middle of the night. If you want to learn more on the subject, check our guide on ‘Does ageing affect sleep?’

What are the symptoms?

The symptom of insufficient sleep or an underlying health condition is the cause of excessive sleepiness. People who experience it may be struggling with fatigue, inability to focus, mental fog, grogginess and sluggishness.

Excessive daytime sleepiness may also cause:

When should you talk to a doctor?

If excessive daytime sleepiness is affecting your day-to-day life, or if you believe it might be a sign of an underlying disorder, you need to see a doctor. To find out why you are sleepy, your doctor will run tests and ask questions to pinpoint the reason for your sleepiness. They can ask your partner (if you have one) if you snore, gasp or move your legs at night. They might refer you to a sleep specialist if they suspect a sleep disorder.

Treatment methods for daytime sleepiness can be different. The doctor is likely to encourage you to get more sleep by suggesting sleep hygiene tips. In addition, they may adjust the medications you take, and they will work with you to develop a treatment plan for underlying disorders.

Good health is dependent on getting enough sleep. If you can identify the cause of your excessive sleepiness and get treatment, you should be able to concentrate better and feel more energetic during the day.