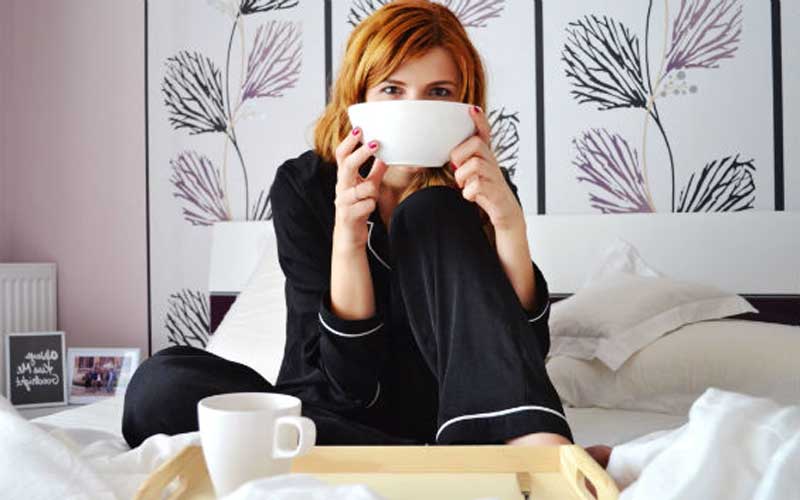 Are you having trouble sleeping? Have you tried everything you can think of, from white noise machines to blue light glasses, and even sleep masks? If you have, but you’re still tossing and turning all night long, maybe it is time for you to try a more natural option, which is tea.

If you can make a sleep tea become a part of your bedtime routine, your body and mind will be more calm and relaxed, meaning you’ll fall asleep faster and sleep better. In today’s guide, we’ll discuss the best teas to help you sleep without dealing with expensive supplements, sleep aids or any other bedding products.

In general, herbal teas can be made from any edible herb or plant. However, ten specific herbs have been shown to improve sleep and promote relaxation. So if you’re looking for a natural way to improve your sleep, look for one of these options:

The flowers of the chamomile plant have been used for many years to treat numerous issues such as poor sleep. Chamomile contains multiple active chemical compounds, and more specifically, it has a mild tranquillizing effect when it binds to benzodiazepine receptors in the brain.

Research on chamomile tea is limited, but a study was done on postpartum women, which reported a reduction in sleep barriers and depressive symptoms.

The valerian root comes with a long history of being used as a sleep and stress aid. Valerian root tea has been used to treat stress, nervousness, headaches, and heart palpitations. According to research, valerian root extract can improve sleep without the side effects of sleep aids.

It’s so effective because of the two naturally occurring sedatives called valepotriates and sesquiterpenes. Overall, people that drink valerian tea improve the quality of their sleep and fell asleep faster. However, for some, valerian root has an odour, and an earthy taste can be unpleasant, which is why you can use a spoon of honey.

Lavender is one of the most popular plants to use regarding sleep, but in most cases, it’s used in aromatherapy as an essential oil. This purple-flowering herb has been used since the Roman empire. There isn’t a lot of research done on lavender tea, but lavender oil has been shown to improve sleep quality and longevity.

Taken as an oral supplement, lavender can even reduce nighttime wakings and improve your mood. However, some evidence is done on women with insomnia that suggests that lavender aromatherapy has a short-term impact. But as a whole, lavender will make you calm and relaxed. It might also help with your sleep and even make you feel less tired.

Tumeric is an ingredient that has grown in popularity in the last couple of years and has taken the world by storm. This natural product contains a high amount of curcumin, which is a powerful antioxidant that helps with detox, anti-ageing and even cancer.

There aren’t many studies done on the effect of turmeric before bed, but it is known to induce sleep, which is why it made today’s list.

However, it’s important to know that regularly drinking cinnamon tea comes with potential side effects such as liver failure due to an ingredient in cinnamon called coumarin. You don’t have to worry about that issue if you are drinking one to two cups a day.

Another popular plant nowadays is ginger. Some people consider this product to have stimulating properties that keep them awake, while others love consuming ginger tea at bedtime. Ginger and its blends and teas are known to aid in digestion and relieve nausea.

So its primary benefit isn’t precisely to improve sleep, but if a tummy ache is keeping you awake, it can be an excellent problem solver and just what you need.

Lemon balm, also known as Melissa officinalis, is a member of the mint family with a slightly sweet and citrusy smell. This plant has been used as an antiviral and antibacterial medicine to treat infections and viruses throughout the years, but today it’s mostly used as a tea or essential oil.

Lemon balm has shown potential in helping restless sleepers and reducing symptoms associated with insomnia. In addition, it is considered a natural antidepressant, and there is a study in which participants who took 500 milligrams of lemon balm reported improved quality of life. Adding it to your evening routine can reduce stress before bedtime!

Just like chamomile, passionflower contains certain flavonoids which bind with the same receptors in the brain as benzodiazepines. Which essentially can help reduce symptoms of anxiety. Studies show that drinking a single cup of passionflower tea can help you sleep better at night.

If combined with other sleep-enhancing herbs such as valerian, this plant can be effective in providing short term insomnia relief as well. However, keep in mind that the study didn’t use tea, but instead, they used capsules, which can hold a more concentrated amount of the herb.

Magnolia bark, also known as Houpo, is a traditional Chinese herb that has been used to aid sleep for thousands of years. Its primary compound is called honokiol, and it has been shown to reduce the time a person needs to fall asleep by binding to GABA receptors in the brain.

Magnolia bark can be used as a tea, as well as a supplement. The tea is made from the bark of the magnolia tree, which might have an unpleasant taste for some individuals. So if you are one of them, we recommend you try the capsulated magnolia bark option.

Last but not least, we have peppermint tea. It is naturally caffeine-free, meaning it won’t boost your energy right before bed. Generally speaking, there are a bunch of reasons why peppermint tea is good for you and your sleep.

What makes it truly remarkable is the ability to act as a muscle relaxant, accompanied by the minty fresh taste and smell.

What are the benefits of drinking tea before bedtime?

Generally speaking, herbal teas have a variety of benefits, including relaxing the body and mind. Herbs have been a way of treating various ailments for thousands of years. People in many cultures and times have used them to treat numerous issues.

For example, peppermint and lemon tea help digestion. In addition, cinnamon blends are excellent antioxidants to help control bad cholesterol and regulate blood sugar. Overall, if you drink herbal teas before bed, your body might increase the absorption of nutrients.

However, if you’re going to drink herbal teas at night, we highly recommend you avoid putting sugar in them because it has a stimulating effect, which may end up keeping you up later.

There have been some discussions about teabags containing microplastics, which might be alarming to some tea lover individuals. However, the good news is that many brands have shifted to newer, biodegradable tea bags or are starting the process of doing so.

Today, tea bags are still considered safe to use by experts, meaning you don’t have to avoid bagged tea altogether. With that said, many people prefer loose tea steeped in a teapot rather than directly in the mug due to multiple reasons such as taste and reduced packaging waste.

If you want to start drinking loose tea, keep in mind that you will need a teapot or tea ball, along with a kettle to boil water. Truth be told, this question doesn’t have a straightforward answer. It’s up to you to decide what are your needs and preferences.

If you’re feeling stressed and persistent worries seem to multiply and keep you lying awake, a warm herbal tea with a homie smell can help you achieve a sense of calmness and go into blissful slumber. Tea can help relax your mind and body, and it can even be guidance on potential treatments.

Understand that if you’re having troubles sleeping, this can affect your mood, performance at work, and overall quality of life. We hope our guide on the best teas to help you sleep has provided you with the information you need. If any questions regarding the subject were left unanswered, feel free to ask in the comments below!